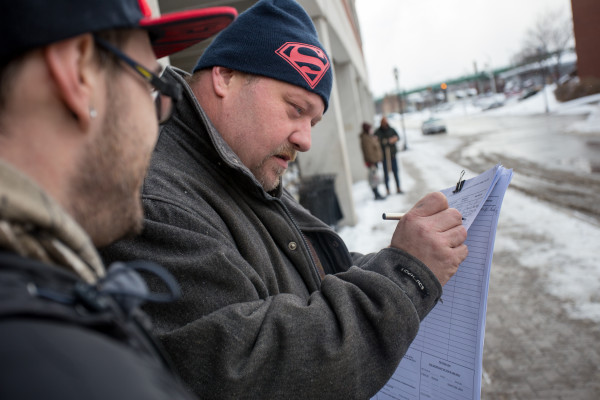 David McKenzie (right), 40, of Bangor signs a petition for a 2016 referendum question to allow a casino in York County on Jan. 13 outside the garage at Pickering Square in Bangor. (Micky Bedell – BDN)

Backers of a new casino in York County submitted signatures to the state on Monday to place a question seeking Maine voters’ support for the effort on the November 2016 state ballot, but given reports from clerks in Maine’s biggest cities and the campaign’s opaque nature, we’re not sure if it’ll get there.

To get on this year’s ballot, citizen initiative campaigns have collect more than 61,000 signatures from registered Maine voters. They were due to the secretary of state’s office on Monday, but they were reviewed by clerks in cities and towns before that.

And city clerks’ early reviews on the casino signature drive weren’t good: Bangor’s city clerk told councilors that her office certified only 2,913 of 6,869 submitted signatures — or 42 percent — and officials in Portland, Lewiston and South Portland said while they didn’t track those numbers, they saw high volumes of invalid signatures.

Problems were attributed to people who weren’t registered to vote or whose handwriting wasn’t legible. Lewiston City Clerk Kathy Montejo said her office received more than 1,100 petition sheets with between one and 30 signatures on them, and on average, between a third and half of those signatures were bad.

It doesn’t matter immediately. Clerks flag signatures that could be invalid, but only Dunlap’s office, which has 30 days to verify them, can toss out signatures.

Ballot initiative petition drives have been thwarted in the past when the secretary of state’s office invalidated so many signatures that the question did not qualify for ballot placement, including in 2002 when a property tax cap question championed by Topsham anti-tax crusader Carol Palesky fell short.

It’s common for campaigns to leave healthy buffers for efforts — backers of marijuana legalization submitted more than 100,000 signatures — but if Bangor’s reported rate of bad signatures for the casino question is even close to holding true, it’s highly irregular.

For example, this year’s campaign to raise the minimum wage in Maine saw just 13 percent of signatures invalidated at the municipal level, according to Mike Tipping, a spokesman for the Maine People’s Alliance, a progressive group running the effort.

But this casino effort has been strange from the start. It would benefit just one controversial Las Vegas developer, Shawn Scott, whose sister has funded the campaign. It began collecting signatures in December, leaving just a month and a half to get them all.

It set off a furious bid for signatures, and the campaign reportedly paid gatherers up to $10 per signature, leading to to complaints of misleading tactics in Bangor and other places. Gatherers also complained that they weren’t being paid for all of their work.

The campaign also hasn’t been transparent. Cheryl Timberlake, an Augusta lobbyist listed as the casino committee’s treasurer, hasn’t answered questions from the Bangor Daily News throughout the effort. When the Portland Press Herald asked her on Monday how many signatures were collected, she said, “Enough.”

Dunlap spokeswoman Kristen Muszynski said when the campaign turned the signatures in, it indicated having 68,000 signatures. But she said it’s not immediately clear if those are just the signatures that clerks deemed valid or every signature that was collected.

Timberlake and Stavros Mendros, the president of Olympic Consulting in Lewiston, which has been paid $112,000 to gather signatures, didn’t return messages seeking comment on that.

Maybe the casino campaign got enough signatures to overcome the issues flagged by clerks. But we don’t know that now. If the 68,000 signatures they submitted are all they got, the casino may not make the ballot.

Collins is no independent on impeachment

Collins is no independent on impeachment