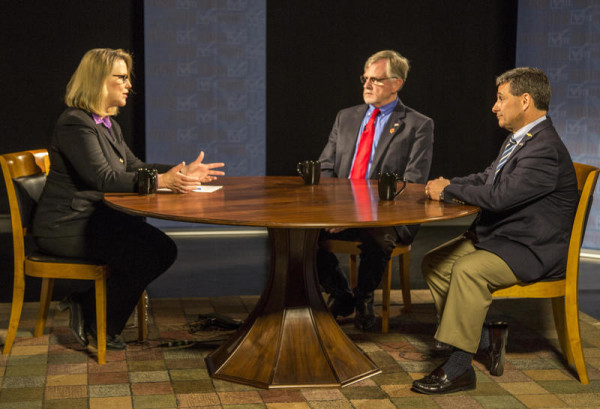 The Republicans running for the party’s 2016 nomination for the seat in Maine’s 1st Congressional District, Mark Holbrook (center) and Ande Smith, appear in a debate in May alongside MPBN moderator Jennifer Rooks. (MPBN photo)

The recount in the Republican primary for the party’s nomination in Maine’s 1st Congressional District has been set for Tuesday, but the result may not be known until week’s end.

Secretary of State Matthew Dunlap’s office said Wednesday that the recount between apparent winner Mark Holbrook and Ande Smith is expected to take between three and four days. The winner will face long-shot odds to beat fourth-term U.S. Rep. Chellie Pingree, a Democrat, in November.

Smith, a North Yarmouth lawyer, requested the recount last week after unofficial totals named Holbrook, a Brunswick counselor, the winner by 55 votes — or less than three-tenths of a percentage point.

Nick McGee, Smith’s campaign manager, said it was an attempt to ensure that the numbers “reflect the will of First District voters,” but Holbrook called it “an exercise in futility.”

The recount, where officials will manually review each ballot, will be held at the Maine Department of Public Safety’s headquarters in Augusta. Until then, state law requires the Maine State Police to collect all ballot, keep them at a secure facility and store them in tamper-proof containers with numbered seals and locks.