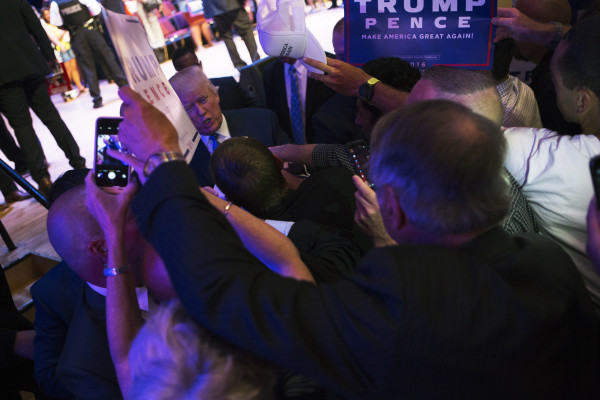 It doesn’t paint a good picture for Trump, who has fallen behind Clinton in national polls since briefly leading her in late July. The Republican nominee has made Maine a point of emphasis in his campaign, holding two rallies here since late June.

Breitbart pegged Clinton at 43 percent to Trump’s 33 percent, with Libertarian Gary Johnson and the Green Party’s Jill Stein pulling 10 percent and 5 percent, respectively. Clinton’s lead is bolstered by a 12-point edge among independents.

The poll surveyed more than 2,000 registered voters using automated phone calls and online responses with a margin of error of 2.2 percent between Aug. 4 — when Trump rallied in Portland — and Aug. 8. It was conducted by Gravis Marketing, a Florida firm that often works for conservative clients and whose results skew slightly toward Republicans, according to a FiveThirtyEight analysis.

Despite Maine’s priority status for Trump in 2016, polling here hasn’t been robust. But this result closely matches the last public poll from the Portland Press Herald in June, which pegged Clinton at 42 percent to Trump’s 35 percent, with 19 percent saying they’d vote for another candidate and 4 percent undecided.

In its reporting, Breitbart didn’t break down the poll by congressional district, which is a bit of a deficiency. (The BDN has asked for that.) That’s because Maine is one of two states that allocates Electoral College votes by district, giving two to the statewide winner and one to each district winner.

Trump figures to play better in the more conservative and rural 2nd District, where the Press Herald poll showed the race effectively tied. But Maine has voted for Democrats in each election since 1992 and the two districts have never picked different candidates.

President Barack Obama’s approval rating could also be a plus to Clinton. Half of Mainers approve of the Democrat’s performance to 42 percent who don’t. Obama beat Republican Mitt Romney by 15 points in 2012. Clinton’s still trailing that mark.

But a difficult national environment makes this poll worrying for Trump. If the election were today and based on current poll results, Clinton would win a landslide, according to RealClearPolitics. Trump wins Maine’s 2nd District in that calculus.

We don’t know if the numbers have moved in rural Maine. But if he can’t win there, the billionaire’s path could get even harder.