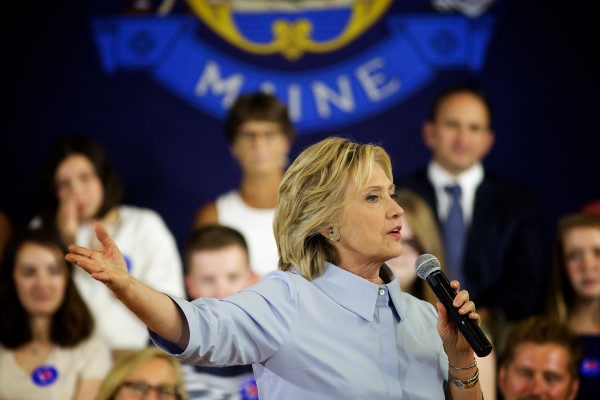 The survey from Emerson College in Boston is a fascinating demonstration of the long-observed “two Maines” political conflict between the liberal south and more conservative north, but it would be unprecedented if the election went this way.

Statewide, Clinton got 44 percent to Trump’s 35 percent, with Libertarian Gary Johnson at 12 percent and Green Jill Stein barely registering at 2 percent among a sample of 800 voters with a margin of error of 3.6 percent.

As they are nationally, Clinton and Trump are deeply unpopular in Maine: Trump was found unfavorable by nearly 64 percent of those surveyed, with Clinton at 54 percent. Gov. Paul LePage, a Republican who has endorsed Trump, was at 57 percent.

Those numbers are largely in line with what we’ve seen in past polls, including one in June from the Portland Press Herald and another in August from the Trump-friendly Breitbart News. Emerson only polls people with landlines, so some polling experts believe that the results skew toward the right.

What’s more surprising is the Emerson poll’s breakdown between Maine’s two congressional districts: Clinton is crushing Trump in the 1st District with 52 percent to his 30 percent, while Trump leads Clinton with 40.6 percent to her 36.3 percent in the 2nd District.

His lead is important, because Maine is one of two states that splits its presidential electors between districts. If Clinton wins statewide and in the 1st District while Trump wins in the 2nd District, she wins three electors and he gets the last one.

Because of this quirk, Maine’s small size and its votes for Democrats in every presidential election since 1992, the state sees little district-level polling. But the Press Herald found a similar, yet less exaggerated pattern in June, with Clinton leading by 15 points in the 1st District and Trump up by one in the 2nd District.

This would be an anomaly, since Maine’s two districts have never voted for different candidates. But it’s at the heart of a push here from Trump, who has visited Maine twice during his general election campaign and hired at least three staffers here, including Lauren LePage, the governor’s daughter.

But Trump faces an uphill battle on the electoral map, and state-by-state poll results collected by RealClearPolitics indicate an easy win for Clinton, even though Trump wins the normally blue 2nd District.

So, though the poll –which surveyed 400 likely voters in each congressional district — says a lot of interesting things about Maine, it may not be so valuable in the big picture. It looks like just one elector is in play.