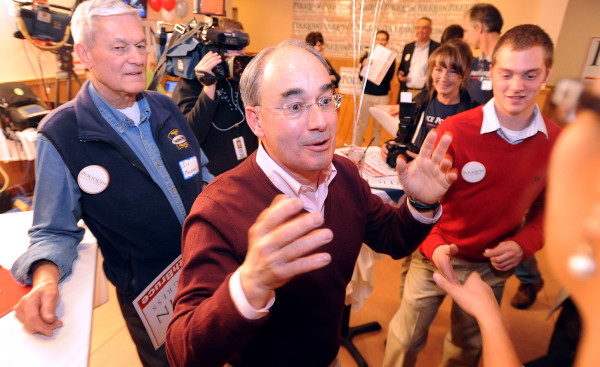 Calling it “onerous” before it passed the House of Representatives on Wednesday, President Barack Obama’s administration issued a Wednesday veto threat of a bill proposed by U.S. Rep. Bruce Poliquin that would force the U.S. to disclose financial information on top Iranian officials.

It’s linked to opposition from Poliquin and fellow Republicans to the Democratic president’s 2015 nuclear deal with Iran, an issue that has been prominent in Poliquin’s nationally targeted 2016 re-election rematch with Democrat Emily Cain.

The House voted 282-143 on Wednesday to pass the bill, which got support from 42 Democrats, but it must gain Senate approval before going to Obama. Two-thirds of both chambers would have to vote to override a veto, and the House fell just two votes shy of that mark on Wednesday.

Obama’s Iran deal was an elaborate compromise, unfreezing roughly $100 billion in Iranian assets by rolling back sanctions in exchange for curbing a nuclear program that many thought was working toward building a bomb.

But Republican opposition to the deal has been fierce, fueled in part by two main issues — potential links between Iran and terror groups and a separate $1.7 billion settlement paid to Iran by the U.S.

The U.S. has labeled Iran a state sponsor of terrorism since 1984, and Secretary of State John Kerry said in January that some of the assets unfrozen under the deal could go to groups labeled as terrorist.

Also in January, the U.S. began paying a $1.7 billion settlement that had languished in an international court since 1981. The timing raised questions of “ransom” from Republicans because payment came after Iran released five American prisoners, and Obama has rejected that it was a ransom.

Poliquin’s bill would make the U.S. Treasury file public reports on the estimated total of assets held by top Iranian officials — including Supreme Leader Ali Khamenei and President Hassan Rouhani — in U.S. and foreign banks and how those assets have been acquired and used.

In a June statement, Poliquin said it would “allow financial institutions to see in public form the type of assets associated with these individuals and hopefully better focus anti-money laundering efforts.”

But the Obama administration rejected that argument in the Wednesday veto threat, saying it would redirect Treasury resources away from identifying “Iranian entities engaged in sanctionable conduct” and “could also compromise intelligence sources and methods,” although Poliquin’s bill allows for some classification.

“Redirecting these assets to preparing this onerous public report would be counterproductive and will not reduce institutional corruption or promote transparency within Iran’s system,” the statement said.

In a statement, Poliquin termed the settlement a “ransom,” saying “while I understand the White House’s concerns, I hope that we can work together to make sure this legislation is signed into law to shed light on the sources and beneficiaries of Iran’s finances.”

Meanwhile, the National Republican Congressional Committee is attacking Cain on her support of the Iran deal in TV ads. She called it a “starting point” that needs to be strengthened in an interview on WVOM earlier this month.

“Nobody, ever, ever wants any money to go to terrorism,” she said. “That’s wrong and to say otherwise is a ridiculous political attack and it’s one of the reasons people hate politics when you say something like that.”

Reopening Maine bars: If not now, when?

Reopening Maine bars: If not now, when?

About those yard signs