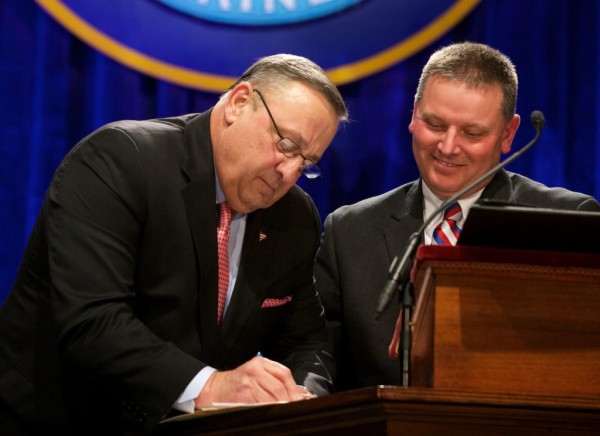 Gov. Paul LePage tried to rally legislative Republicans to “fix bayonets” against Democrats on his two-year budget proposal in a radio interview on Tuesday, saying members of his own party “don’t show strength” in the Legislature.

It was an opening salvo in the governor’s public relations campaign on his $6.8 billion two-year spending proposal, which was released on Friday and would shift Maine to a flat income tax by 2020 while broadening the sales tax base to services including snow plowing, concerts and barber shops.

That’s similar to the tax changes in LePage’s 2015 budget proposal, in which the sales tax changes were opposed by many Republicans, who worked with Democrats to draft a compromise budget over the governor’s veto.

A divided Legislature will likely set this budget up for the same fate. On Monday, reaction from Republican legislative leaders was muted, while Democrats protested the budget’s proposed education and health care cuts.

Republicans incurred LePage’s wrath in 2015, leading to a frosty relationship between LePage and Senate President Mike Thibodeau, R-Winterport, who was targeted in budget-related robocalls two years ago by the governor’s daughter.

On Tuesday, LePage told WVOM that while Democrats will oppose many of his tax changes, Republicans should for “once in their lives … please fix bayonets” against the other party.

“Because we can win this; the Maine people want it,” LePage said. “It’s just that we don’t show strength in the Legislature. We always cave.”

The governor signaled that the budget again will be a political cudgel for him: He has said he’ll soon restart his town hall meetings across Maine and said on Tuesday that he’ll “campaign and lobby” for the budget, which he said the Legislature will give him “if the Maine people get behind me.”

LePage also tried to minimize concerns that lawmakers have to put a budget in place by July 1 to avoid a state government shutdown. He said that, lacking a new budget, state government could function into a new fiscal year with spending guided by a continuing resolution, a practice relied upon often by the federal government during budget stalemates caused by gridlock in Congress.

But the budget will likely be resolved in June and is now on a slow legislative track. Thibodeau told reporters on Monday that while there are similarities between this proposal and past ones, there are also major differences and his caucus needs time to digest them.

“We live in a new day, a new age, so we’ll give them the benefit of the doubt and an opportunity to make their case,” he said.