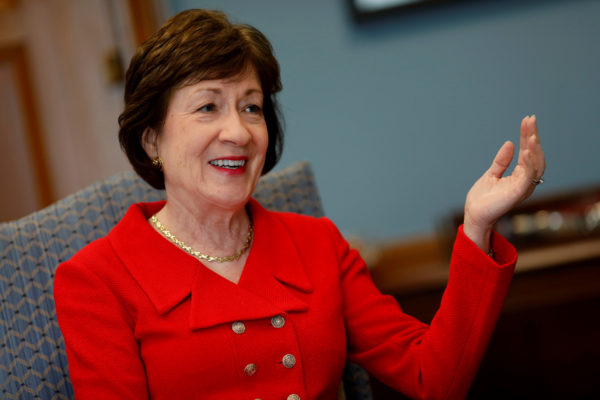 U.S. Sen. Susan Collins of Maine speaks during an interview in Washington earlier this year. (Reuters)

U.S. Sen. Susan Collins told MSNBC on Monday that “it’s too difficult to say” whether President Donald Trump will be the Republican nominee when he runs for re-election in 2020.

Even if it was just a simple way for the moderate Republican to parry a question she can’t know the answer to, it comes as Trump is struggling with approval ratings under 40 percent and after a poll found that Collins may struggle in a gubernatorial primary.

Collins has never been a fan of Trump, who she rejected as her party’s nominee during the 2016 election. Instead, she cast a write-in vote for House Speaker Paul Ryan of Wisconsin in the general election.

The Maine senator has also worked against the president in key policy areas, most notably when she cast a key vote against a Senate Republican proposal to repeal and replace the Affordable Care Act, drawing heat from Gov. Paul LePage.

Some in Maine’s Republican grassroots have expressed frustration around that vote, which could be an issue if Collins runs to replace LePage, which she is considering. But a poll conducted earlier this month by a Democratic firm showed her behind the only declared Republican, former LePage welfare chief Mary Mayhew.

It’s highly uncommon for a president to face a nomination fight. The last big one came in the 1980 Democratic primary, when President Jimmy Carter dispatched Massachusetts Sen. Ted Kennedy. But Kennedy won 12 states and Carter lost the general election in a landslide to Republican Ronald Reagan.

But Trump may have to deal with one if he continues to languish. The latest round of polling from Gallup had him at 36 percent approval. He hasn’t gotten higher than 46 percent during his seven months as president.

Collins told MSNBC in the interview on the Bangor waterfront that she’s “weighing where I can do the most good for the people of Maine.” When asked if Trump factors in that decision, she said “not really.”